Now we’ll expand the three-note chord shapes to three-note arpeggios, hitting all the roots, 3rd, and 5ths in the position. 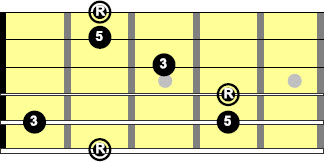